As part of my research into women composers, I have been playing around with first names – partly as a way of identifying genders among general lists of composers. The most common first name for female composers overall is Mary / Marie / Maria, followed by Anne, Florence, Alice, Dorothy, Elizabeth, Louise and Margaret.1

I thought it would be interesting to compare this with male composers, whose most popular first name is John / Johann / Johannes / Jean / Giovanni. Which are there more of, women, or Johns?

Using the Harant dataset of almost 48,000 composers, and identifying men and women by the likely gender of their first names,2 a quick bit of programming produces the following interesting graph…3 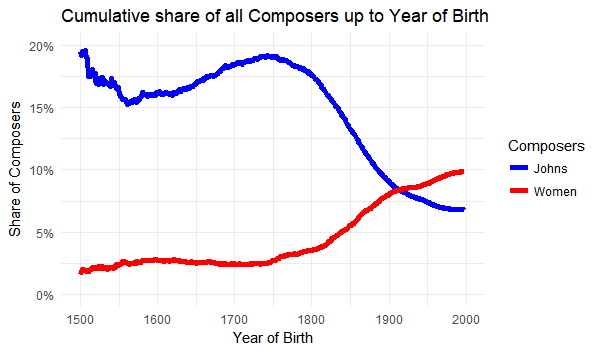